Blues take a trip to South Wales this weekend as they face Swansea City at the Liberty Stadium on Saturday (3pm KO). This is the second game in a row that Blues face a team who made it into the Play-Offs last season, with Swansea losing in the semi-finals to Blues opening weekend opponents Brentford.

The last time Blues travelled to the Liberty Stadium the sun was shining, a certain Blues Academy product made his First Team debut in the league, and Ben Stokes’s heroics at Headingley kept England’s hopes alive in the Ashes. Those were only positive things about that trip to South Wales – a 3-0 drubbing was meted out to Blues, who were well and truly outclassed.

Fast forward a year and both teams have had the same start to the season. Both won their opening games in the League by 1 goal to nil, and both crashed out of the EFL Cup to lower league opposition. However, both teams will be buoyed by their opening results and will be looking to build on this.

Blues announced the signing of Scott Hogan on Wednesday night, arriving on a four-year deal from Aston Villa. Social media reaction seemed a little mixed, but the acquisition gives Blues more firepower and options in attack should Karanka want to change it up. However, in today’s press conference Karanka revealed that Hogan would only feature in the squad this weekend if the paperwork is completed on time.

Karanka was also full of praise for Zach Jeacock for his performance against Brentford last week. When asked about which keeper would feature this weekend, he stated that, “I have already made my mind up before last Saturday to who will be starting in goal at Swansea”. This could indicate that Jeacock may have to settle for being on the bench this weekend.

Jonathan Leko (ACL) and Josh McEachran (also ACL) are both still unavailable, although Karanka is hopeful that Leko may return in the next 3-4 weeks. Andreas Priesto is still out with a calf injury.

Swansea were a formidable force after the restart last season, including that dramatic final day victory against Reading that saw them surge into the Play-Offs. However, ahead of the new season, Swansea boss Simon Cooper revealed he has told the players to forget about the heartbreak of last season and focus on their new campaign. Nevertheless, the Swansea faithful are hoping that this will be the season that they can make their return to the promised land.

The Welsh side have made five signings over the summer – Korey Smith, Freddie Woodman, Morgan Gibbs-White, Marc Guehi and Jamal Lowe. There have only been three outgoings – Joel Asoro off to Genoa on loan, Bersant Celina making a permanent move to French side Dijon and Tom Caroll going on a free transfer to QPR.

In his press conference today Swans boss Cooper revealed that they had no new injury concerns ahead of the game, with only George Byers missing out with a groin injury. 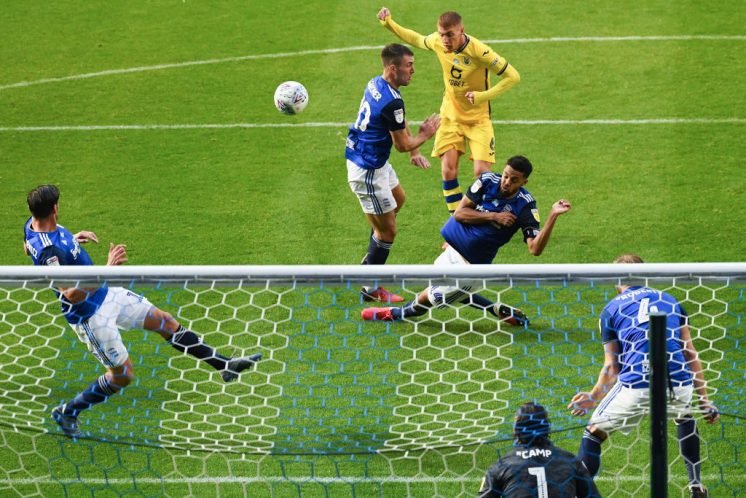 Last four meetings between Blues and the Swans;

Both sides will be looking to build on the respective victories of their opening weekends. Swansea will very much seek to rubber stamp their promotion challenge early, after missing out last season.

Blues do not have a great record against Swansea – in fact, Blues have only taken 2 points from their last 4 league games against the Swans. Blues will have to be as switched on against the Welsh team as they were against Brentford.

Personally, I think Swansea may have too much for us and will comfortably win this game 3-0. However, as with last week’s prediction, if Blues can take a point away from this game, I will be incredibly happy.