A moment that many Blues fans have been waiting for. After 16 months of empty stadiums, Blues travelled to League 2 side Northampton Town for another pre-season fixture.

A return to the stands has been a long time coming for many fans, it’s no surprise that Blues showed up in style to the game tallying up around 1700 travelling fans. A debut for the new 2021/22 Away Kit saw fans turn up in an impressive array of modern and classic kits. With smiles all around, it was a special moment when the first rendition of Keep Right On was sung and there was not a silent Blues fan in sight.

An exciting first half saw Blues making an ideal start, scoring the opener after just 5 minutes after a magical solo goal courtesy of the Spanish Wizard himself, Ivan Sanchez. Assisted by Jonathan Leko, Sanchez beat around 5 defenders to produce a quality finish past the Northampton Keeper.

The hosts responded on the 12-minute mark with an impressive finish from new arrival Mitch Pinnock.

Soon after, an uncharacteristic mistake from the usually firm-footed Sarkic saw The Cobblers take the lead after the Wolves soon-to-be loanee was dispossessed in his own box by a persistent Kabamba, resulting in the easiest of tap ins.

However, the response from Blues was a typical and classic reply. A pinpoint cross from Kristian Pedersen from the left flank saw who else but top goalscorer Lukas Jutkiewicz finish in typical Jukey fashion with a solid and ruthless header from close range on the 38-minute mark. Once again, the roar from the travelling Blues fans erupted and Blues finished the first half on level terms. 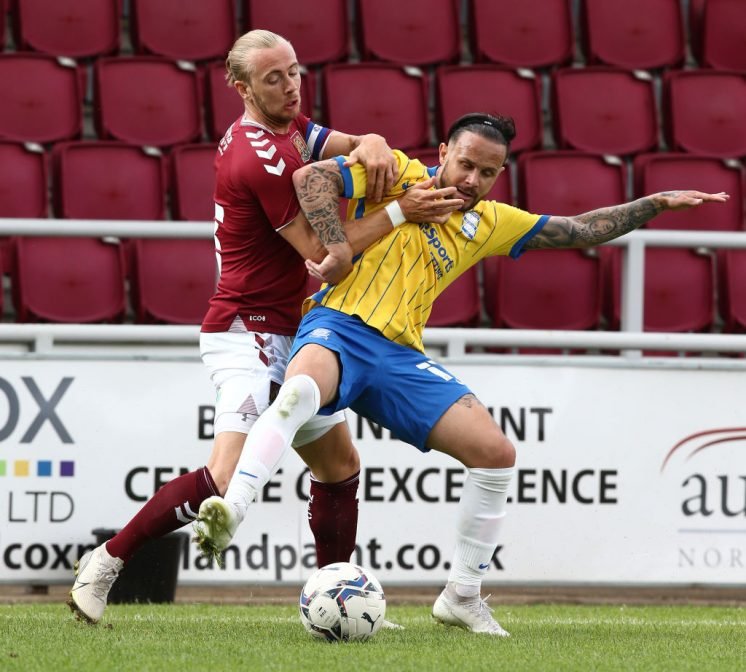 The second half proved to be less goal heavy. An early onslaught saw attempts from Sanchez, Gardner and Woods force Cobblers Keeper Jon Brady to make crucial saves. Early pressure from Blues saw the wings being played continuously, with Peds and Bela working the left and Sanchez and Colin working the right. Aerial deliveries were not in short supply for both Juke and his strike partner Jonathan Leko, who looked a changed player with a new found confidence and composure on the ball.

However, on the day it wasn’t meant to be. A solo run from Chukwuemeka saw a frustrating deflected shot tumble into the net, giving the hosts the lead after 68 minutes. From that moment on, the chances came for Blues.

A substitution also saw Blues youngster Remi Walker make an appearance, replacing Sanchez on the right wing as the game approached 75 minutes. The youngster played an impressive 15 minutes, making some important runs and linking up well with Maxime Colin.

Multiple opportunities came for Blues, with many aerial efforts put just over the bar. A bizarre decision from the referee to award a freekick outside of the box after a blatant handball in the area frustrated both Blues players and fans. However, the Cobblers held on for dear life and saw the fixture out to the final whistle, with the final score standing at 3-2 to the hosts.

Although the score didn’t go Blues’ way, the highlight of the day was the long-overdue reunion between the fans and players after an agonising 16-months away. Throughout the fixture, Blues fans outshone the home support, drowning out any noise despite the game not going our way. It also meant that Blues fans were able to show their appreciation for the players, with some of last season’s signings having never played in front of a Blues support.

Impressive performances included Ryan Woods, who commanded the midfield and provided Blues with a calm head in the centre of field. Jonathan Leko seems to have found a new on-pitch persona, being a key asset to the side and providing an assist to Ivan Sanchez early on. As well as this, his on the ball work was impressive and he made many key passes to keep the flow of play moving.

Blues now look forward to the return home, to St Andrews, where we face newly relegated West Bromwich Albion for the fifth and final pre-season fixture. Blues fans eagerly anticipate the first St Andrews rendition of Keep Right On after the return to stands.