After 3 games without a win, Blues got back to winning ways with a late Jutkiewicz goal against newly-promoted Blackpool. It certainly wasn’t pretty in the windy conditions, however, it was an important 3 points that propelled Blues up to 13th in the table. Here is how all the action unfolded:

Pre-match:
Blues continued to utilise the back 5, however, Lee Bowyer made 3 changes from the goalless draw away at Coventry with Dean, Woods, and Oakley being replaced by Pedersen, Graham, and Jordan James— his first start for Blues.

Blues started the game on the front foot and were inches from taking the lead within the first minute as Bela lashed an effort from outside of the box which narrowly went wide of the top corner. Just minutes later, Grimshaw was forced into the first save of the game as a Marc Roberts long throw was headed towards his own goal by a white shirt.

After 10 minutes, the game became very scrappy. The windy conditions were evident after a series of poor set-pieces by both sides. Blues struggled to create chances after their early flurry and at the other end, Blackpool should’ve taken the lead as Gary Madine somehow scuffed an effort over the bar from only a few yards out.

The second half started as much as the first half had played out with both sides misplacing passes and struggling to create chances, although, Blackpool did look quite threatening on the counterattack.

It was Blues who would have a brilliant chance to take the lead, however, as possession was retrieved in midfield and McGree— who had looked like Blues brightest spark— put Hogan through on goal. Unfortunately, before the number 9 could get his shot away he was crowded out by defenders and Deeney was unable to latch onto his pass.

The chance seemed to give Blues some attacking momentum and as Riley McGree was wrongly penalised for a foul, it brought the home crowd to life.

Despite the newly found momentum, it was Blackpool who should’ve taken the lead as Josh Bowler’s shot took a deflection off Dion Sanderson. Fortunately for Blues, Sarkic reacted quickly to parry it away from goal— a fantastic save.

The failure to put the chance away would soon cost Blackpool as Riley McGree played a brilliant pass out wide to Pedersen. The left-back took his time to play a brilliant cross into the box which was flicked on by young Jordan James for substitute Lukas Jutkiewicz to stab home with just 9 minutes to play. Blackpool players were loud in their appeals for offside— it was a very close call. However, with recent refereeing decisions, I hardly think any Blues fans will be complaining. 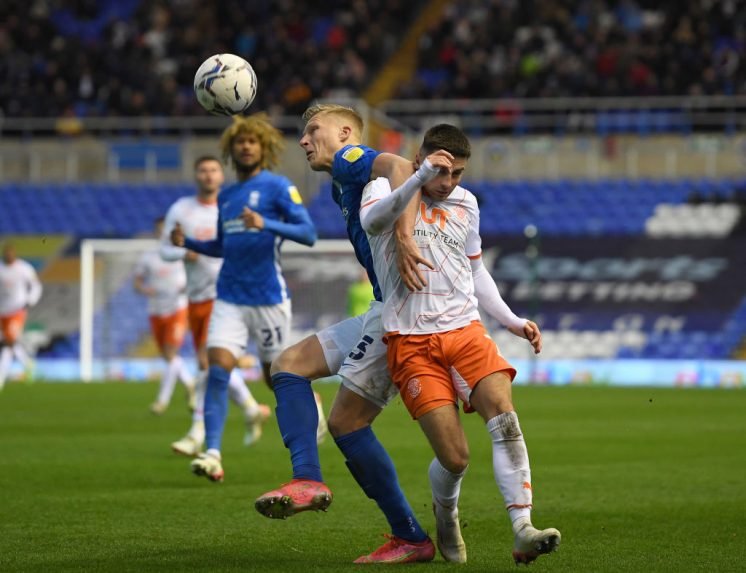 Blues did a brilliant job seeing out the final minutes of the game with Pedersen and Sunjic making some vital interceptions and tackles. It seemed that Blues would have a chance to finish the game off in the final minute as added time as Jukey and Hogan found themselves in a 2v1 situation, unfortunately, Juke’s pass wasn’t quite right. Luckily Hogan did manage to retrieve possession and hold the ball in the corner flag. Some clever play from Jordan Graham led to Blues winning a free-kick to see out the final few seconds which they did.

This match certainly won’t go down as a classic, nevertheless, Blues did manage to get back to winning ways after a poor first half and that’s all that matters. The key to Blues’ success today was doing the basics right in the second half. The first half was characterised by loose passes and a lack of chances, however, in the final 30 minutes, it was a much different Blues side. Eyebrows were raised after Bela was taken off for Aneke as Bowyer looked to change the system by going to 4 at the back and this tactical tweak definitely paid off.

It was a good all-around performance in the final 30 minutes, however, there were five standout players for me. McGree and Sunjic played a huge part in turning around our fortunes as McGree’s trickery had the Blackpool defence on strings and his pass out wide to Pedersen led to the goal while Sunjic made a series of tackles and interceptions which allowed us to keep going forward. Pedersen also deserves a lot of praise not only for his role in the goal but also for being solid all game and dealing with everything thrown at him. Sarkic once again was faultless and made a brilliant save which in turn led to him picking up his 10th clean sheet of the season. Finally, the young 17-year-old Jordan James also deserves a lot of praise for the maturity and composure he showed on his first start— he didn’t put a foot wrong all game and claimed an assist for his efforts.

Next up for Blues is Millwall. Like today, it probably won’t be a pretty or memorable game, however, this is a good chance for Blues to build on today’s win and climb into the top half of the table.